Olivia is 22, currently living in Virginia. She was diagnosed with a brain tumor, Astrocytoma, just as she was turning 21. It’s been exactly a year since her diagnosis.

Olivia was living with her husband on a military base in Korea, with her first child who was only 9 or 10 months old. She was extremely tired and felt “really off”. She was having the worst headaches she’s ever had. She put her daughter down in her playpen and just couldn’t do anything for her. She felt awful. When her husband got home she told him something was wrong with her and they needed to go get her checked out. They went to the ER, and hadn’t realized that she had lost consciousness..she didn’t know where she was, what year it was, what her name was. At that point, they sent her to get an MRI which is when they found the tumor. The tumor is located on the left lower part of her brain.

To complicate matters, her doctors felt she needed to be back in the US to receive the medical care required for her particular tumor. Within the next few days, she and her husband were flown to Hawaii. She laughs as she says, “Not to make the story more complicated but, when we got to Hawaii, they scheduled my surgery with a great surgeon. On the day I was expected for surgery, I found out that I was pregnant with my second child. So it just went from crazy, to crazier!”.

She was given the option to continue with surgery that day as planned, but she would have to terminate the pregnancy because it wouldn’t be safe for a first trimester developing fetus. Or, she had the option to wait until she was further along in the pregnancy with the fetus at least 4 or 5 months into development. They chose to wait. While they waited, they returned home to Virginia to be closer to family and support. It certainly wasn’t easy dealing with a young child, being pregnant, and dealing with the pandemic in addition to all that!

She had her surgery at John Hopkins in Maryland. Everything went well, but coming out of brain surgery was really tough. Olivia had some trouble with her speech and finding the right words and she had a lot of headaches, but she pulled through. She is starting to get back to her normal self. As a parent of two young children, she doesn’t have much time for herself but she feels so lucky because her two children are very easygoing.

After recovering from her surgery, she was referred to another doctor for her current, on-going treatment. He started her on radiation about a month after her son was born. That was a big challenge for her as she had to go in, every day for a month, to receive radiation treatments. Now, her doctor has her doing a monthly oral Chemotherapy. She has 10 more months of this regime. So far she is feeling pretty good. The first time she didn’t feel too much, but the second round she had some nausea.

Her doctor is waiting to see how she responds to all her treatments. So far, things are looking good. When her oral treatments are completed, her doctor will determine if he wants to pursue additional treatments or if she will be given the “all clear”. In conjunction with the oral Chemo treatments, she has an MRI and a blood draw every month to make sure everything is stable. So far, so good.
Olivia found Heart of The Brain through her connection with Isabel and her survivors support group.
A good stress relief for her is creating art. She likes to paint. She likes to spend time with her dog and of course her kids.

Olivia says in order to get through the last 2 years,
“I try to find things to be grateful for because what we went through was kind of a miracle. If my husband hadn’t been in the army, and if we hadn’t been where we were, I wouldn’t have gotten the treatment that I needed. I don’t know how it happened, but we got really lucky, so I try to remember that and be grateful for the little stuff and for where we are now.”

Her dad and her mother-in-law live within driving distance. Her husband is stationed in Virginia, where they will be able to stay for the next 3 years.

Olivia is slowly starting to feel herself again. Her motivation to do art is returning too which makes her feel good as well. Her kids are also enjoying doing art with her.

Her goals for now are to get back to a normal life. Additionally, Olivia wants to go back to college at some point. She is thinking she might enjoy being an Art Teacher to young kids. And she plans to stay positive on a daily basis. 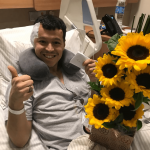 Tad Rocha: “We are not alone.”Stories