Markus Chrudimsky: “Fight your hardest because it’s so worth it!”

because it’s so worth it!”

On Valentine’s Day, 2004, Markus Chrudimsky, age 29, had a Grand Mal Seizure. He had been previously diagnosed with Hypoglycemia so he immediately went to his Endocrinologist to have blood work done.

Markus’s doctor confirmed his blood levels were ok, but referred him to a neurologist, and ordered an MRI. Markus recalls the jaw dropping images of his brain scan. At that point, he knew they had seen a large mass. After the MRI was completed, the tech recommend Markus contact his doctor as soon as possible. “What they found was a large mass, which was much later identified as a Oligodendroglioma, grade 2.” Markus recalls.

Living in a small town of 8,200 people, Markus had to drive 35 miles to Wausau, Wisconsin to see his Neurologist and Neurosurgeon. His doctors started him on Lamictal, anti-seizure medication and scheduled a biopsy to take place in July 2004. The biopsy results came back as Dysplasia (the presence of cells of an abnormal type within the tissue, which may signify a stage preceding the development of cancer).

Initially, doctors told him his tumor was non-cancerous. Markus was then referred to MINCEP, an epilepsy center located in Minneapolis. He had treatment there for 6 months, with the help and support of his wonderful family. Markus remembers his mother asking the doctor about his prognosis, and the doctor’s response being neither hopeful nor diplomatic.

The next step was getting a second opinion. Looking for the best fit, Markus called the Mayo Clinic to explain his situation and see what their treatment recommendation would be.  During these discussions with the doctors at Mayo, they told him they suspected he had brain cancer.

Markus was surprised and shocked to hear this. He was immediately scheduled to meet with a neurosurgeon, and a variety of related doctors over the next two weeks. This was the end of November, more than 9 months since his first seizure. His medical team at the Mayo Clinic explained in great detail what his diagnosis was, based on their biopsy and reports, including their treatment plan and prognosis. Based on his doctor’s treatment plan, he started 6 months of oral chemo, Temodar, from January through June 2005.

In July, Markus had a Craniotomy surgery – a procedure done while the patient is fully awake. The need for this type of surgery was due to the size and location of the tumor which was extremely close to his motor strip (both gross and fine motor skills are located there). Markus knew going into surgery there was an 18% chance that he could lose his ability to speak and his right side could be paralyzed.  Unfortunately, that is what exactly what happened.

Following 2 years of physical and speech therapy, Markus fully regained his speech, except for a few words that trip him up, and sometimes he has difficulty finding a word. He regained most of the mobility in his leg, about 30% of his arm, but his right hand is not functional. Nevertheless, he is thrilled that he can walk and talk, and feels grateful for his abilities.

In 2011, Markus started to develop severe headaches. The doctors did a stereotactic procedure to connect the ventricles of his brain. The outcome was not successful, so in 2012, they placed a one-way Ventricluloperitoneal shunt in his brain. In late 2013, the tumor started to grow again. Surgeons were able to remove 95% of the mass. If they were to resect the whole tumor, doctors were afraid Markus would be confined to a wheelchair with loss of speech, which of course he didn’t want to risk.

He was then referred to a radio-oncologist, also at Mayo in Rochester. The Radiation oncologist suggested that his tumor would be perfect for a clinical trial she was conducting. The Clinical Trail required an 18-F Dopa PET scan where he was injected with radioactive material that differentiates cancer cells versus scar tissue.  One specific color identifies active tumor cells. What the doctors had previously thought was scar tissue all around his tumor, was identified as active tumor cells. Markus believes he wouldn’t be alive if it wasn’t for that clinical trial. As a result of that trial, he underwent 29 rounds of radiation in April and May of 2014.

Things were good for a few years. But in November 2019 when Markus went for his 6 month MRI, his Physician Assistant said they found something.

They found 3 tumors all under 11 millimeters. Markus started oral chemo again, beginning in February through August, 2020. To date, 2 of those tumors are completely gone and the remaining one is less than 4 millimeters. Markus had another MRI in October and the results are stable. He started a new Clinical Trial exclusive to the MAYO clinic, FINGERPRINT MRI.  This trial allows him to be in the MRI scanner 5 minutes less each session.

Markus has a remarkable attitude despite his difficult journey. He has a friend who is a news reporter in Rochester. Markus invited his friend to follow along, with a cameraperson, on a day that he had radiation treatment. His friend ended up doing a three and a half minute story that aired on the news. Markus was surprised and says that was the impetus for him beginning his involvement in brain cancer awareness. That is when he met Isabel, through her brain cancer survivor support group on social media, and found out about Heart of the Brain.

His words of inspiration for others:

“I know it’s overwhelming to get this kind of diagnosis. Just let it sink in, then fight your hardest because it’s so worth it! You have to have a support system. I would not want to think about if I had to do this on my own. Just to know that my mom is there for me to cry with, to just be there.”

He is grateful his vision wasn’t affected. He wants to support Brain Cancer awareness and help others going through a similar journey. 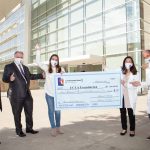 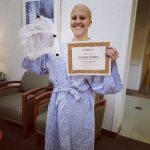 Suzanne Samples: Your Story to WriteStories