The top time in 2018 in the famed New York City marathon – which drew 53,000 contenders – was 2 hours, 22 minutes and 48 seconds … But there was no bigger champion than Forest Hills, N.Y.-resident Alan Kaufman, one of the very last to cross the finish line in 10 hours, 5 minutes and 6 seconds.

Diagnosed with stage-four metastatic melanoma brain and lung cancer in 2017, he missed the marathon that year for the first time since in 25 years. But with treatment going well by 2018, although not in remission, he decided to train for his 25th race by taking long walks.

“When I got sick, the first thing I asked my brain surgeon is, ‘Will I do a marathon again?’” says, Alan. “To me, the marathon is the greatest moving party on the planet. There’s no better day in New York than Marathon Sunday. My oncologist and neurologist were thrilled. My nurses were impressed,” he laughs about the professionals who oversee his treatment and bi-weekly immunotherapy infusion treatments.

Since an 11-hour surgery to remove tumors in his brain has impaired his balance, Alan walked the race, utilizing hiking poles and accompanied by two guides from Achilles International, a nonprofit that provides disabled athletes with a community of support, including guides for marathons—A charity Alan has supported as a guide in the past, shepherding 13 blind runners over the years.

“People are frightened of cancer and don’t know how to react. But running in the marathon says, ‘Hey guys I’m still here. I’m still fighting. Don’t worry so much.’ We are living in a time where cancer is not the immediate death threat it once was. There’s medicine out there and the technology has changed. You can’t give up or stop living your life. There’s always hope and possibility. It’s actually very life affirming.”

But despite a can-do attitude and a lot of support, it was still a daunting feat. “It set a whole new standard of pain for me and took everything I had,” recalls the 61-year-old athlete, who was forced to lay down along the route at 20 miles and then stop to stretch every 15 minutes for the final 6 miles. “I just kept thinking about what it would be like if I didn’t finish.”

With the bleachers nearly empty, police re-opening the streets – forcing him to finish on the sidewalk – and cheered on in the dark by his wife and other family members, Alan crossed the finish line and victoriously took home his 25th medal to add to the collection that hangs in his bedroom.
“It was the most difficult marathon I ever ran and the most triumphant one,” says the TV producer and actor. “Getting sick sucks, but it sparked something in me. I stay positive and my job is to help and inspire others in any way I can. If I give hope to one other person, I’m good with that.
“I’ve learned a lot about life and a lot about love and kindness from all kinds of people, including those I don’t personally know,” Alan shares. “Having cancer is a horrible thing, but there’s a certain beauty to it if you look at it in the right way. It has taught me to enjoy life and see the beauty in what I witness every day. I stop when it’s raining now and look up toward the sky and smile in appreciation and wonder. Even a cup of coffee tastes better.”

And when the self-admitted caffeine addict isn’t at Starbucks, painting or drawing cartoons, doing housework or chronicling his journey online, he’s already training for his next race … Walking 35 miles each week. 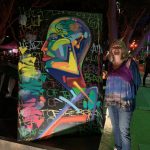